In my September Book Haul, I said I couldn’t promise I’d be ordering more books soon. And that’s a good thing because I wouldn’t have kept the promise.

I booked a last minute ‘holiday’ (I was working in the mornings) with one of my best friends and our aim was to relax. The only thing we wanted to do, was eat, sleep, and lie next to the pool with a book.

So, of course, I had to order a stack of books.

I ordered four on a Dutch webshop and then may have just said ‘Fuck it’, and ordered everything I’d added to my Bookdepository list too.

So after I got home from Gran Canaria, there were several packages waiting for me and they all contained books.

The same thing happened to me when I got back from Madrid last month, and I have to admit, it’s a thing that makes me very happy to be home again.

Anyway, it’s a long list this month, but I guess it’s a preview of reviews that are to come in the next couple of weeks (and some I read & reviewed already!). 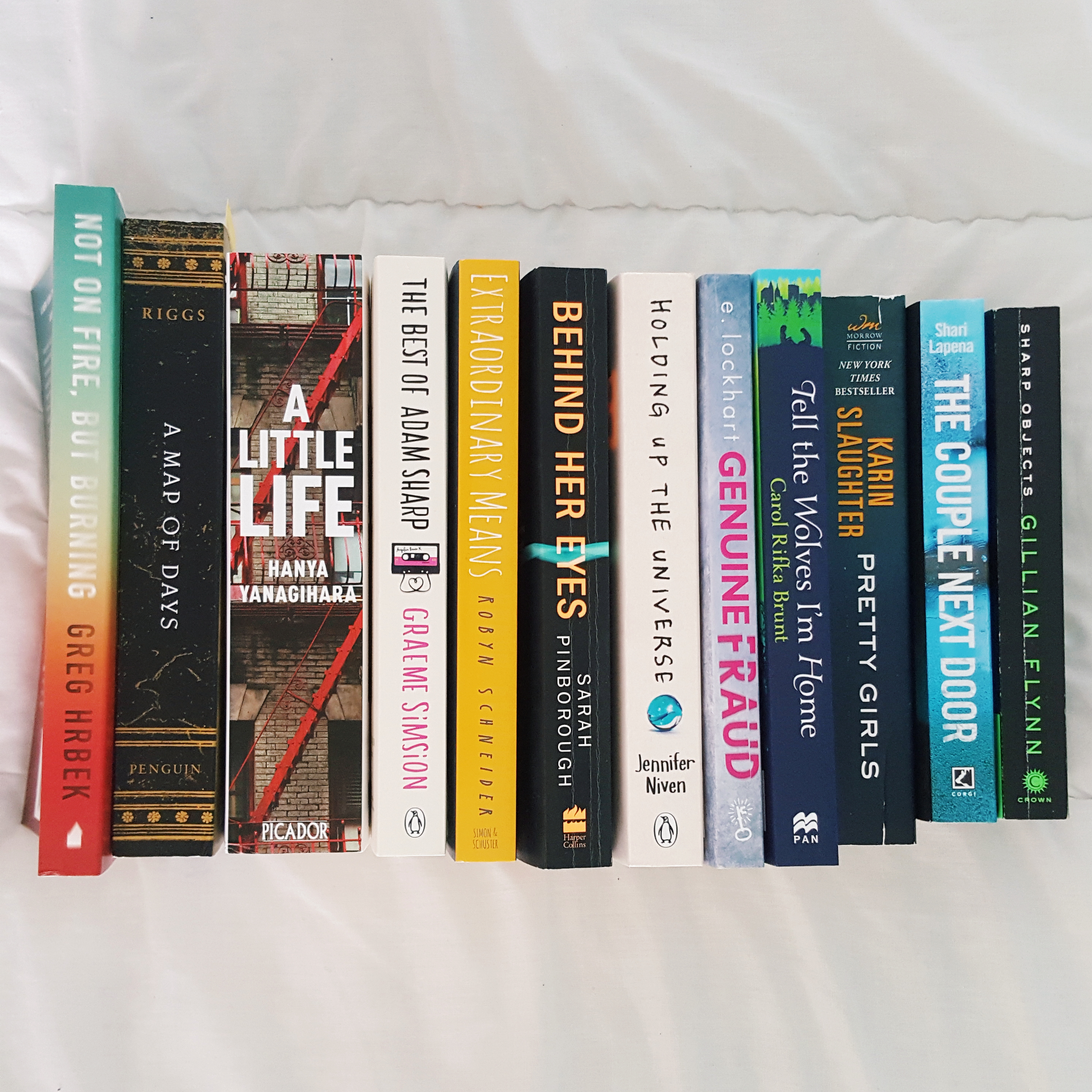 There’s only one person who has ever truly understood fourteen-year-old June Elbus, and that’s her uncle, the renowned painter Finn Weiss. Shy at school and distant from her older sister, June can only be herself in Finn’s company; he is her godfather, confidant, and best friend. So when he dies, far too young, of a mysterious illness her mother can barely speak about, June’s world is turned upside down. But Finn’s death brings a surprise acquaintance into June’s life—someone who will help her to heal, and to question what she thinks she knows about Finn, her family, and even her own heart.

At Finn’s funeral, June notices a strange man lingering just beyond the crowd. A few days later, she receives a package in the mail. Inside is a beautiful teapot she recognizes from Finn’s apartment, and a note from Toby, the stranger, asking for an opportunity to meet. As the two begin to spend time together, June realizes she’s not the only one who misses Finn, and if she can bring herself to trust this unexpected friend, he just might be the one she needs the most.

Fresh from a brief stay at a psych hospital, reporter Camille Preaker faces a troubling assignment: she must return to her tiny hometown to cover the murders of two preteen girls. For years, Camille has hardly spoken to her neurotic, hypochondriac mother or to the half-sister she barely knows: a beautiful thirteen-year-old with an eerie grip on the town. Now, installed in her old bedroom in her family’s Victorian mansion, Camille finds herself identifying with the young victims—a bit too strongly. Dogged by her own demons, she must unravel the psychological puzzle of her own past if she wants to get the story—and survive this homecoming.

Not On Fire, But Burning by Greg Hrbek

Twenty-year-old Skyler saw it from the window: a metallic object that descended from the sky at a terrific speed, slowed above the Golden Gate Bridge, and then severed the bridge’s suspension cables before a toxic mushroom cloud lifted above San Francisco…

Flash-forward to a future America, where no one knows who was responsible for the explosion in San Francisco—or even what the explosion was, exactly—but Muslims have nonetheless been herded onto the old Indian reservations in the West. In suburban New York, Skyler’s little brother, Dorian, is twelve and dreaming about killing Muslims…when his next-door neighbor adopts a Muslim orphan from the territories.

That simple act of benevolence will set off a series of increasingly terrifying incidents that force an entire community to reckon with their most deeply held beliefs, and—for Dorian—will lead to either tragedy or redemption.

Your neighbour told you that she didn’t want your six-month-old daughter at the dinner party. Nothing personal, she just couldn’t stand her crying.

Your husband said it would be fine. After all, you only live next door. You’ll have the baby monitor and you’ll take it in turns to go back every half-hour.

Your daughter was sleeping when you checked on her last. But now, as you race up the stairs in your deathly quiet house, your worst fears are realized. She’s gone.

You’ve never had to call the police before. But now they’re in your home, and who knows what they’ll find there.

Imogen is a runaway heiress, an orphan, a cook and a cheat.

Jule is a fighter, a social chameleon and an athlete.

Imogen and Jule. Jule and Imogen.

An intense friendship. A disappearance. A murder, or maybe two. A bad romance, or maybe three.

A girl who refuses to be the person she once was.

A girl who is…a genuine fraud.

Holding Up The Universe by Jennifer Niven

Everyone thinks they know Libby Strout, but no one’s ever looked past her weight to see who she really is. Since her mum’s death, Libby’s been hiding, but now she’s ready for high school. I want to be the girl who can do anything.

Everyone thinks they know Jack Masselin too – sexy, aloof and too cool for school. But Jack’s swaggering confidence is hiding a secret he must keep at all costs. Be charming. Be hilarious. Don’t get too close to anyone.

Then Jack meets Libby. And their worlds change. Because sometimes when you meet someone, the whole universe just comes into focus.

Since her husband walked out, Louisa has made her son her world, supporting them both with her part-time job. But all that changes when she meets David.

Young, successful and charming – Louise cannot believe a man like him would be attracted to her. That all comes to a grinding halt when she meets his wife Adele.

Beautiful, elegant and sweet – Louise’s new friend seems perfect in every way. As she becomes obsessed by this flawless couple, she can’t help but wonder are they really this perfect?

A Map Of Days by Ransom Riggs

Having defeated the monstrous threat that nearly destroyed the peculiar world, Jacob Portman is back where his story began, in Florida. Except now Miss Peregrine, Emma, and their peculiar friends are with him, and doing their best to blend in. But carefree days of beach visits and normalling lessons are soon interrupted by a discovery—a subterranean bunker that belonged to Jacob’s grandfather, Abe.

Clues to Abe’s double-life as a peculiar operative start to emerge, secrets long hidden in plain sight. And Jacob begins to learn about the dangerous legacy he has inherited—truths that were part of him long before he walked into Miss Peregrine’s time loop.

Now, the stakes are higher than ever as Jacob and his friends are thrust into the untamed landscape of American peculiardom—a world with few ymbrynes, or rules—that none of them understand. New wonders, and dangers, await in this brilliant next chapter for Miss Peregrine’s peculiar children.

When he’s sent to Lathan House, a boarding school for sick teens, Lane things his life may as well be over.

But when he meets Sadie and her friends – a group of eccentric troublemakers – he realises that maybe getting sick is just the beginning. That illness doesn’t have to define you, and that falling in love is its own cure.

The Best Of Adam Sharp by Graeme Simsion

Adam Sharp met the love if his life on the other side of the world. He was playing in a bar in Australia when Angeline requested a song. It was the start of a relationship he’s never forgotten – but not every duet ends on a high note.

Two decades later and half a world away, Adam is stunned by Angelina’s message. He thought he was happy. He thought he had everything. Now all he can think about is her.

Adam has sung about second chances – but does he believe in them? And is he prepared to risk everything to find out if they ever come true?

It’s been more than twenty years since Claire and Lydia last spoke. Claire is the glamorous trophy wife of an Atlanta millionaire; Lydia, a single mother dating an ex-con, struggles to make ends meet. But neither has recovered from the disappearance of their sister Julia two decades earlier—and the shocking murder of Claire’s husband brings the horror and heartbreak of the past roaring back into their lives.

The vanishing of a teenage girl and the killing of a middle-aged man, almost a quarter-century apart: What could connect them? As the form a wary truce, the surviving sisters unearth the secrets that destroyed their family all those years ago…and find the astonishing truth where they least expected it.

When four classmates from a small Massachusetts college move to New York to make their way, they’re broke, adrift, and buoyed only by their friendship and ambition. There’s kind, handsome Willem, an aspiring actor; JB, a quick-witted, sometimes cruel Brooklyn-born painter seeking entry to the art world; Malcolm, a frustrated architect at a prominent firm; and withdrawn, brilliant, enigmatic Jude, who serves as their center of gravity.

Over the decades, their relationships deepen and darken, tinged by addiction, success, and pride. Yet their greatest challenge, each comes to realize, is Jude himself, by midlife a terrifyingly talented litigator yet an increasingly broken man, his mind and body scarred by an unspeakable childhood, and haunted by what he fears is a degree of trauma that he’ll not only be unable to overcome—but that will define his life forever.

Have you read any of these? What did you think?

[…] Then, when I joined #bookstagram, I kept reading about it. So many people were reading it and giving it 4 and 5 star reviews. I knew I had to have it asap, and ordered it with my gigantic book haul in October. […]

[…] I don’t even remember when I added ‘Tell the Wolves I’m Home’ by Carol Rifka Brunt to my Goodreads, but I did and it ended up in my gigantic October book haul. […]

[…] when I put in my big October order, I decided to just go ahead and order it. I didn’t want to wait any longer to read this book […]